Stephen King entered into the gang of horror authors with Carrie. 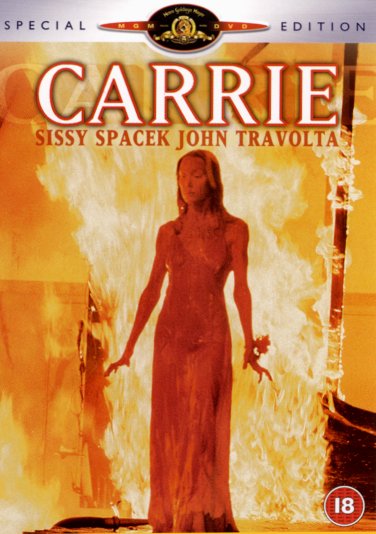 The cover picture has a mysterious girl clearly depicting the theme of the book. Since the time it was published it remained as one of the best horror novels of all times. Carrie is a sixteen year old teenage girl who possesses great telekinetic powers. She was basically ill-treated all her life by her ridiculous mother and even the fellow students at school.

Her mother used to lock her up in the closet so that she is forced to pray to be relieved of her sins. She thought her to be the offspring of the Satan. Due to all these pressures she begins to unleash her mysterious powers. The story goes on talking about the several ways she is teased at school and how cruelly her mother treats her. She is a basically a shy girl, with low grades and unattractive looks. The story depicts this with a weird episode where Carrie has her first periods and has no idea what is happening to her. It is a teacher who helps her from the teasing students and a fellow school mate gets detention for this.

The prom party is the turning point of the novel where the lead character is offered to go to the prom party with Tommy Ross. Two fellow students had planned to humiliate Carrie publicly and this eventually makes Carrie furious. She goes about destroying the whole city, her mother and everything else in her way and finally she too dies due to the stab on her shoulder by her mother.

The novel has a very tragic end where the school teacher resigns as she feels guilty of not having understood the girl. A friend of this mysterious girl writes an autobiography with her experiences after the prom that day and the possibility of a similar incident later. And finally the book ends horrifying the readers with a letter which tells about a girl developing telekinetic powers.

The adolescent age has been well depicted with things like sexuality, maturation, religion, society and several other aspects in a scientific and broader view. Once the novel ends, you will realize that it is not Carrie who is horrifying, but the people around her. The book was later made into a feature film in 1976 by Brian De Palma and is a great horror novel adaptation. The lead role players even received nominations in the Academy Awards.

Five years after the success of the movie, MGM and GEMS have joined hands with Roberto Aguirre-Sacasa as the script writer to remodel Carrie as a closer adaptation of the book. It was commented by Stephen King that he would have liked to have Lindsay Lohan take up the role of Carrie, but in this movie this role is done by Chloe Moretz. The movie will be directed by Kimberly Pierce. The movie is well awaited as it will have Sarah Palin, the US Vice President candidate playing the pivotal role of Carrie's mother. The filming is supposed to begin this summer.